The House of the Rising Sun – The Animals

Posted on January 12, 2011 by aliveintheword 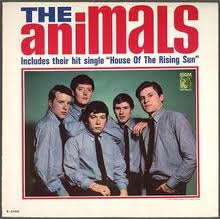 I grew up in the 1960’s. What a wondrous time that was. It was a time of change, dramatic change. There was an unpopular war. The hippies were in vogue. Drug use was rampant. We were into discovering the esoteric. Political protest, racial strife. Big in the 1960’s. I’m told there was something called “fee love.” And there was the music! What a wonderful decade the ’60’s was.

Well, except for the war, I was on the sidelines for most of the dramatic stuff of the ’60’s. And the music… Music of the 60’s carried a message. It dealt with all of the things mentioned above. Music was activism. Music was memorable. Music had words you could understand. Music carried a message. Music wasn’t drown out by beat, bass and, well, noise. Music pervaded the decade.

Last night, while trying to get to sleep, this song from the Animals entered my head. I don’t know why, it just did. As I lay in the dark, reeling in many thoughts, The House of the Rising Sun was prominent in the background.

here are the lyrics:

Well, I got one foot on the platform
The other foot on the train
I’m goin’ back to New Orleans
To wear that ball and chain

Well, there is a house in New Orleans
They call the Rising Sun
And it’s been the ruin of many a poor boy
And God I know I’m one

Last night, this song was just “background” as I was trying to clear my mind and get to sleep. It’s not a lullaby.

Recently I was talking to a young man, still in his teens, who has found his own “House of the Rising Sun.” It’s right here, on the internet. It’s pornography. This young man has been consumed by pornography. He lost his girlfriend, a job, fell in his grades and has difficulty with his parents because of pornography.

This young man lives in misery.

He did not come to me asking for guidance or help. He made that clear. In time, he will. To me or someone else he trusts. For today, he just wanted me to know his situation, why he was behaving in some of the ways he does.

How many “Houses of the Rising Sun” are there out there to destroy our youth? It scares the heck out of me. Yet, when I look back at the 1960’s, I can truly say, “There but for the grace of God went I.” On the other hand, I found my own “House of the Rising Sun” a bit later in life. and it was equally, if not more destructive than what is happening to this young man. It is “by the grace of God” that I have left these things behind.

Is there a message here? Not really. It’s just something that has been rolling around in my old, balding head for several hours now. I needed to get it out.

Alive in The Word

1 Response to The House of the Rising Sun – The Animals