Posted on January 4, 2012 by aliveintheword 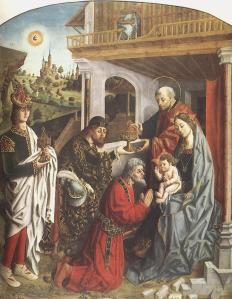 Epiphany – a sudden or striking realization.

Epiphany is also known to many as the “Gentile Christmas.”

Eight hundred years before Jesus birth, Isaiah foretold His arrival to be “King of the Jews. (see Isaiah 60:1-6) The shepherds came to worship this newborn king and Herod the Great saw Him as a threat to his throne. The Jews expected the birth of a king like King David, a mighty political ruler and warrior.

So, why is Epiphany called the “gentile Christmas?”

Although the magi may have had ancient Jewish roots tracing back to the exile and time of Daniel they were not Jews. Anyone who was not Jewish was called a “gentile.” So, these wise, gentile scholars came to worship a different type of king than the Jews expected. They recognized that this man was born to a different purpose. He was not simply the king of a particular nation or race of people, but to ALL people!

Epiphany also commemorates the realization that Jesus is the Son of God. His Kingdom, intended for all people, is everlasting. His is the eternal Kingdom of Heaven.

So, my Christian brothers and sisters, celebrate the arrival of our King. Epiphany, the gentile Christmas.

Shalom, Art
Alive in The Word

Missouri, USA Married to Marty, 45 years 2 sons (with 2 daughers-in-law) and 2 granddaughters Life dedicated to serving Jesus Christ and delivering the Good News
View all posts by aliveintheword →
This entry was posted in CHRISTIAN LIFE AND THE WORD and tagged Christmas, Epiphany, gentile, http www youtube, jewish roots, king of the jews, many protestant denominations, political ruler, twelfth day of christmas. Bookmark the permalink.

9 Responses to Epiphany, The Gentile Christmas: