SET ME ON FIRE!

Posted on July 16, 2012 by meetingintheclouds 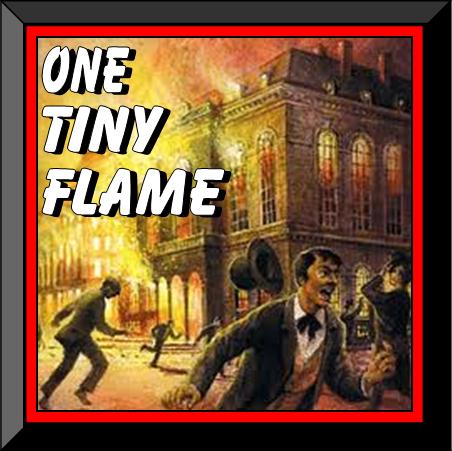 The story goes that a woman was milking her cow by the light from a little lamp of oil. The cow kicked over the lamp. The flame kindled a wisp of hay, and another wisp, and another, until all the hay in the stable was alight and it burned the whole stable. Soon the next building was on fire, and the next, and the next . . . and so started the Great Chicago Fire of 1871.

(Historians agree that the Chicago Fire did indeed start in the small barn of Patrick and Catherine O’Leary, that bordered the alley behind 137 DeKoven Street on Sunday evening, October 8, 1871, but there is no evidence that a cow kicked over an oil lamp)

There is no doubt of the damage caused.  Soon the fire had spread to neighbouring houses and sheds. Superheated winds drove flaming brands northeastward.  As the fire raged through the central business district, it destroyed hotels, department stores, Chicago’s City Hall, the opera house and theatres, churches and printing plants. The fire continued spreading northward, driving fleeing residents across bridges on the Chicago River. There was mass panic as the blaze jumped the river’s main stem and continued burning through homes and mansions on the city’s north side.

From its origin at the O’Leary property, it had burned a path of nearly complete destruction of some 34 blocks.   Eventually the city determined that the fire destroyed an area about four miles (6 km) long and averaging 3/4 mile (1 km) wide, encompassing more than 2,000 acres. Destroyed were more than 73 miles of roads, 120 miles of sidewalk, 2,000 lampposts, 17,500 buildings, and $222 million in property – about a third of the city’s valuation. Of the 300,000 inhabitants, 90,000 were left homeless.

Yes, we could pause to think – as James reminds us – that the human tongue can be a fire, a world of iniquity – a tiny thing that can cause immense damage.  We need to guard our tongues because just a few small words can cause irreparable harm to people, to families, to Churches, to groups of all sorts.  For a great coverage of this subject, please see this post by writinggomer at
https://ptl2010.com/2012/07/15/putting-out-the-fire-in-my-mouth/

But today my thoughts run along a different line . . .

God uses small things – and small people.
He hides the wealth of a field of wheat in bags of tiny seeds.
He hides His giant oak trees in little acorns.

Of myself I am nothing. I can achieve nothing.
But God chooses to use the weak things of this world
and He empowers them to do the impossible.

If I allow the fire of God to take hold in me, I might only be a wisp of hay,
but if it sets ME on fire, that fire will communicate itself to another –
and another – and another.
It will burn on and on
and THEN we will see God at work in a world
which is in desperate need
but is turning its back on the only One who can answer that need.

If many of us allow ourselves to be used as a spark,
we may see fires all over the world.
We may see revival!

In Christ, we are more than conquerors.
Surrendered to Him, He could use us to turn our world upside down.

I am Cloudwatcher, a 76 year old Christian lady, happily married to a wonderful man for over 50 years. We have five wonderful sons, all with at least one University degree and in top positions in their chosen fields. One son is still single but four have found perfect wives and they have given us five lovely grandchildren. I was born in England and while I'm proud of my English heritage, I am doubly proud to be a true-blue, fair-dinkum Aussie. My husband and I are committed Christians whose first priority is to love and serve our risen Saviour, the Lord Jesus Christ. My life story will tell of my journey from abuse to peace. I suffered 22 years of abuse, being constantly told I was totally evil and an ugly freak: no one would ever want me, so I might as well do the world a favour and kill myself.
View all posts by meetingintheclouds →
This entry was posted in CHRISTIAN FOUNDATIONS OF BELIEF, CHRISTIAN LIFE AND THE WORD, CHRISTIAN TEENS BLOGS and tagged Bible, Christian, Christianity, Cross, death, fire, jesus, life, Personal, revival, tongue. Bookmark the permalink.

13 Responses to SET ME ON FIRE!