Wounded for Our Transgressions 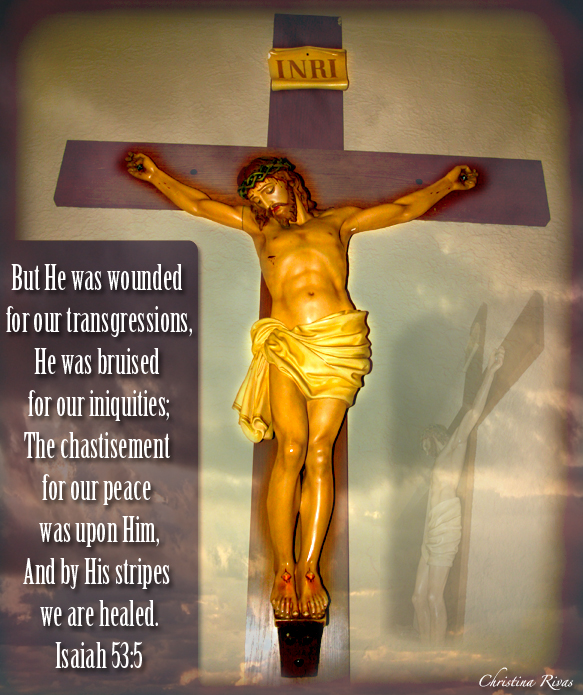 When I was photographing a wedding last fall, I saw this large cross hanging in the back of an old church in Erie, Pennsylvania, USA. Crosses hanging in churches, houses and from people’s necks never quite capture the horrific physical, emotional and spiritual experience Jesus Christ endured for us. During the time Jesus lived, crosses were a common symbol of execution. Today it might be the electric chair. It would seem strange to Christians back then to see people publicly display a cross like we do today. The Romans murdered Christians every single day on the cross as a way to say, “Don’t mess with Rome.” The bodies were left in place to rot and decompose. They were considered “food for the crows, scraps for the dogs.” The cross would be a just another symbol of history if it were not for Jesus Christ. He was the only innocent man to ever shed His blood on a cross.

No one in his right mind would ever be willing to die a torturous and shameful death if he was innocent. “Very rarely will anyone die for a righteous person, though for a good person someone might possibly dare to die” Romans 5:7.

Jesus Christ died for everyone. “For there is no partiality with God” Romans 2:11. He died for all of those in generations past, present and future who were considered “good” or “decent” people in the world’s eyes, and He died for hardened criminals and outcasts of society.

Because of Jesus’ sacrifice on the cross, our sins are forgiven. “While they were eating, Jesus took bread, and when he had given thanks, he broke it and gave it to his disciples, saying, ‘Take and eat; this is my body.’ Then he took a cup, and when he had given thanks, he gave it to them, saying, “Drink from it, all of you. This is my blood of the covenant, which is poured out for many for the forgiveness of sins” Matthew 26:26-27

Obeying the Lord’s will, He drank the cup of wrath in the Garden of Gethsemane. “Abba, Father,” he said, “everything is possible for you. Take this cup from me. Yet not what I will, but what you will” Mark 14:36. “‘My Father, if it is not possible for this cup to be taken away unless I drink it, may your will be done’” Matthew 26:42.

He was in anguish over this decision. “He began to be deeply distressed and troubled” Mark 14:33. “His sweat was like drops of blood falling to the ground” Luke 22:44.

Jesus took upon Himself the sins of the world. “God made him who had no sin to be sin for us, so that in him we might become the righteousness of God” 2 Corinthians 5:21.

Jesus felt the sting of betrayal by one of those closest to Him. “While he was still speaking a crowd came up, and the man who was called Judas, one of the Twelve, was leading them. He approached Jesus to kiss him, but Jesus asked him, ‘Judas, are you betraying the Son of Man with a kiss?’” Luke 22:47-48

Jesus knew He would be arrested, yet He did not resist. “Do you think I cannot call on my Father, and he will at once put at my disposal more than twelve legions of angels?” Matthew 26:53

As Jesus was arrested, His best friends abandoned Him in His time of need. “A time is coming and in fact has come when you will be scattered, each to your own home. You will leave me all alone. Yet I am not alone, for my Father is with me” Mark 16:32. “Then all the disciples deserted him and fled” Matthew 26:56.

One of Jesus’ beloved disciples, Peter, denied Jesus. “Peter replied, ‘Man, I don’t know what you’re talking about!’ Just as he was speaking, the rooster crowed.  The Lord turned and looked straight at Peter. Then Peter remembered the word the Lord had spoken to him: ‘Before the rooster crows today, you will disown me three times.’” Luke 22:60-61

Jesus told the chief priests who He is and what is still to come. “‘You have said so,’ Jesus replied. ‘But I say to all of you: From now on you will see the Son of Man sitting at the right hand of the Mighty One and coming on the clouds of heaven’” Matthew 26:64.

Jesus was tried as a criminal before Herod and Pilate. ““We have found this man subverting our nation. He opposes payment of taxes to Caesar and claims to be Messiah, a king” Luke 23:1.

Pilate washed his hands of Jesus, and left it to the angry mob to determine Jesus’ fate. “With loud shouts they insistently demanded that he be crucified, and their shouts prevailed. So Pilate decided to grant their demand” Luke 23:23-24.

Jesus endured great suffering that was meant us. “Surely he took up our pain and bore our suffering, yet we considered him punished by God, stricken by him, and afflicted. But He was wounded for our transgressions, He was bruised for our iniquities; the chastisement for our peace was upon Him, And by His stripes we are healed” Isaiah 53:4-5

Jesus’ body was badly beaten by soldiers as He was led like a lamb to the slaughter. “Then Pilate took Jesus and had him flogged.  The soldiers twisted together a crown of thorns and put it on his head. They clothed him in a purple robe and went up to him again and again, saying, ‘Hail, king of the Jews!’ And they slapped him in the face” John 19:1-2.

A man, whose life would be forever changed by his experience, carried the cross for Jesus. “A certain man from Cyrene, Simon, the father of Alexander and Rufus, was passing by on his way in from the country, and they forced him to carry the cross” Mark 15:21.

Jesus, the only innocent man to have ever walked the Earth, was crucified between two criminals. “Two other men, both criminals, were also led out with him to be executed. When they came to the place called the Skull, they crucified him there, along with the criminals—one on his right, the other on his left” Luke 23:32-33.

Jesus became nothing as He was mocked and insulted while He was dying on our behalf. “But I am a worm and not a man, scorned by everyone, despised by the people. All who see me mock me; they hurl insults, shaking their heads” Psalm 22:6-7.

Jesus was scorned by the human race, whom He created and loved. “He was despised and rejected by mankind, a man of suffering, and familiar with pain. Like one from whom people hide their faces he was despised, and we held him in low esteem” Isaiah 53:3.

The truth about Jesus was written on the cross. “And a superscription also was written over him in letters of Greek, and Latin, and Hebrew, This Is The King Of The Jews” Luke 23:38.

The Father could not gaze upon His beloved Son. “Your eyes are too pure to look on evil; you cannot tolerate wrongdoing” Habakkuk 1:13.

Jesus felt alone and abandoned by God on the cross. “Why are you so far from saving me, so far from my cries of anguish? My God, I cry out by day, but you do not answer by night, but I find no rest” Psalm 22:1-2.

Jesus endured temptation. “In the same way the chief priests and the teachers of the law mocked him among themselves. ‘He saved others,’ they said, ‘but he can’t save himself! Let this Messiah, this king of Israel, come down now from the cross, that we may see and believe’” Mark 15:31-32.

Jesus showed us the meaning of ultimate love and sacrifice on the cross. “For God so loved the world that he gave his one and only Son, that whoever believes in him shall not perish but have eternal life” John 3:16.

It was God’s will for Jesus to die. “Yet it was the Lord’s will to crush him and cause him to suffer, and though the Lord makes his life an offering for sin, he will see his offspring and prolong his days,  and the will of the Lord will prosper in his hand” Isaiah 53:10.

What does the sacrifice and suffering of Jesus Christ mean to you? How does it impact your life today?

13 Responses to Wounded for Our Transgressions