Posted on September 2, 2013 by secretangel

One of the big mistakes that I made as a victim of abuse was not only trying to forgive, but also trying to forget. You see, when you forget something, you actually start all over. Then, you are more likely to allow something to repeat itself. You also don’t learn from your mistakes as you pretend that certain events did not happen.
Like many, in my desire to believe my abuser when he said that he would change, I would agree to give him another chance…again and again.

I naively believed that he would change. Unfortunately, in my desire to fix him and change him, I was allowing him to tear me down emotionally. I had accepted the constant verbal and emotional attacks as normal communication.

That is a problem with most victims. They have a tendency to want to fix their abusers. In the meantime, they get more and more broken. Unfortunately, we can’t fix anyone. Only God can fix someone. All that we, as victims, can do is to get away to a place where we are safe and can start healing. Then, the next most important thing that we can do is to forgive those who have hurt us. God requires us to forgive. He does not require us to forget.

Now, I can tell you that forgiving others who have hurt you is not an easy task. I can honestly tell you that for years after the abuse and infidelity, I wanted the one who had hurt me so deeply to “burn in ***”. Also, as a Christian, I struggled with forgiving him because I felt that it meant that I should stay friends with him for the children. But every time I was near him, he had a control over me and torn me down emotionally again. I had to finally break all contact with him to begin healing and truly release him to God. 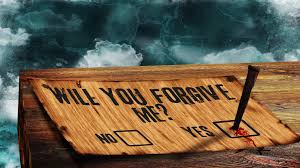 Unfortunately, the wounds were so deep and the memories were so suppressed, that God had to bring many suppressed memories back to my consciousness so that I could deal with them and release the hurt that accompanied them. So you see, I know from experience that we should not forget…but we have to forgive and release it all to God so that we can heal and move on.

Matthew 18:21-22    “Then Peter came and said to Him, “Lord, how often shall my brother sin against me and I forgive him? Up to seven times?” Jesus said to him, “I do not say to you, up to seven times, but up to seventy times seven.”