Posted on February 28, 2014 by setyourpathsstraight 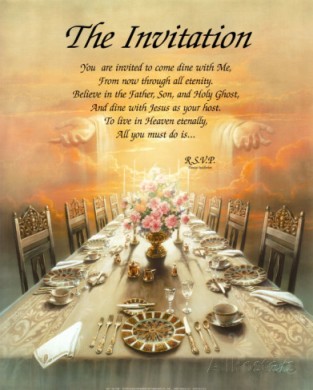 Jesus spoke to them again in parables, saying: “The kingdom of heaven is like a king who prepared a wedding banquet for his son. He sent his servants to those who had been invited to the banquet to tell them to come, but they refused to come. Then he sent some more servants and said, ‘Tell those who have been invited that I have prepared my dinner: My oxen and fattened cattle have been butchered, and everything is ready. Come to the wedding banquet.’

“But they paid no attention and went off—one to his field, another to his business.  The rest seized his servants, mistreated them and killed them. The king was enraged. He sent his army and destroyed those murderers and burned their city.  Then he said to his servants, ‘The wedding banquet is ready, but those I invited did not deserve to come.  So go to the street corners and invite to the banquet anyone you find.’ So the servants went out into the streets and gathered all the people they could find, the bad as well as the good, and the wedding hall was filled with guests.

“But when the king came in to see the guests, he noticed a man there who was not wearing wedding clothes. 12 He asked, ‘How did you get in here without wedding clothes, friend?’ The man was speechless.

“Then the king told the attendants, ‘Tie him hand and foot, and throw him outside, into the darkness, where there will be weeping and gnashing of teeth.’

I was listening to praise music today, “Here I Go Again” by Casting Crowns.   It has been a long time since I heard this song.   It is about a man’s struggle to share his faith with a dying friend… he laments that he needs to speak the “words of life” to his friend – but he is afraid to.  He sings,  “This might be the last chance to tell him that You love him…”

When I heard these words, I experienced such a deep conviction in my spirit.

Lord, how many times have I passed by the opportunity to share “words of life”, the Gospel of salvation through a personal relationship with Jesus Christ with someone who does not know Him?  Have I been keen to remember Jesus’ command to go out and share the gospel, to be His ambassador to those in my own “kingdom of influence”?

In response to my conviction I went to the Bible and read the parable of the wedding feast.  The King, Jesus Christ, invites everyone, every nation, every tongue, to life everlasting with Him…But is up to each and every one of us to accept the invitation. What stops us?

I remember a story someone told me once.  A group of musicians and a soloist singer were hired to perform at a wedding.  The reception was to be held at the top of the Space Needle in Seattle, Washington, USA.  There were size limitations for the party due to its venue, as the only way to get to the top was via a lift.  All the musicians received an invite.  The soloist singer was delighted to be included.  But she got so caught up preparing for the wedding as well as attending to all her other engagements and performances, that she forgot to send her RSVP back for the reception.

After the wedding, she went to the Space Needle with the wedding party and waited in line to take the lift to the top with the group.  When she got to the elevator, her name was checked against the RSVP list and was not among them.  Now she was invited, but she didn’t think it was important enough to RSVP.  After all, she was part of the wedding party – of course she should be included….right?  But she wasn’t.  She was turned away…

As followers of Christ, we are God’s ambassadors – He will ask us to be the messengers to deliver His invitation.  We are not responsible for tracking the RSVPs, but we are going to be held accountable if God makes an opportunity for us to share the TRUTH with others and we shy away due to the personal cost to ourselves.

So tonight, in writing this blog I am praying that God will show me how to share “words of life” with a friend , a stranger or even maybe someone reading this right now.

God loves all of us so much that He sent His Son to pay the price for our sins – your sins, MY sins.  Jesus laid down His life so that through belief in Him, we can be saved from death – spiritual death and separation from God for eternity.  So hurry up – don’t be turned away from the King’s Wedding Banquet – RSVP YES –  ASAP !

… because, if you confess with your mouth that Jesus is Lord and believe in your heart that God raised him from the dead, you will be saved. 10 For with the heart one believes and is justified, and with the mouth one confesses and is saved. 11 For the Scripture says, “Everyone who believes in him will not be put to shame.” 12 For there is no distinction between Jew and Gentile; for the same Lord is Lord of all, bestowing his riches on all who call on him. Romans 10:9-12

It is my desire to serve God and others through writing; by proclaiming His goodness, provision and character in story form. Though I was not always a follower of Jesus Christ, I have experienced life changes that can only be a result of personally meeting Him. He is not a God of religion, but of relationship. I don't have the answers to life's challenges, but I know where to find them...only in God's Word can any of us stop following crooked paths. The month of my spiritual birthday, I read Proverbs 3:5-6 and claimed it as my life verse... "Trust in the Lord in all you do, lean not on your own understanding In all your ways acknowledge Him.... and He will Set Your Paths Straight." Thank you for your visit today. Please come back again.
View all posts by setyourpathsstraight →
This entry was posted in A CLICK A BLESSING TODAY, CHRISTIAN LIFE AND THE WORD, SHARING STRUGGLES , Shaping Spiritual Solutions! and tagged Casting Crowns, Evangelism, Matthew, Parable of the Wedding Feast, words of life. Bookmark the permalink.