HE LIFTS US UP: ABUSE AWARENESS– Physical Abuse

The problem with abuse is that it is hidden. It is done behind closed doors. It is done in total secret. The only ones who know that it is happening in most cases is the abuser and the victim. However, as previously mentioned, there are times that the victim does not even realize that they are being abused. This is because part of the abusers methods is “mind control.”

With the verbal and emotional abuses, the victim is so beat down mentally and emotionally that they do not think that it is abnormal behavior. It becomes normal. It becomes accepted. It becomes part of who they are and almost expected. They become the peace makers, always apologizing for things that is not their fault or walking on egg shells to avoid confrontation. Even when the abuse becomes physical, many times the victim is still apologizing for whatever they did to upset their attacker… because in many cases, the abuser is the one that they love the most, whether a spouse or a boyfriend.
So even when the situation turns into violence, what do we find that happens? Most often, the victim hides the bruises from everyone, keeps the secret, and refuses to seek legal assistance because “he said that it would never happen again.” These victims in most cases have been so “brainwashed”, that they can not see the cycle of abuse that they are trapped in.

Now, let’s consider this question: What is Physical Abuse? 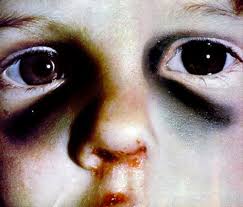 Physical abuse is any unwanted, intentional contact with another person’s body. Physical abuse does not have to cause pain or leave any signs of contact like a bruise. However, it is still an unhealthy relationship with another person when this occurs.
Some examples of physical abuse include:
Biting, shaking, punching, kicking, scratching, pulling hair, pushing, throwing something at another person, grabbing a person, strangling, pulling another person, tearing clothing, grabbing clothing, hitting or smacking a person, using a knife, bat, gun or any other weapon in a threat and also, grabbing someone to prevent them from leaving or forcing them to leave. Also, forcing someone to have sex or perform any sexual act is also considered a physical abuse.
So you see, some of these abuses fall under several different types of abuse. Whatever is done, it is still abuse and still causes hidden wounds and brokenness to the victim. By this point, many victims do not feel that they deserve any better… But unfortunately, it is only when the bruises, black eyes and obvious signs of abuse show, that most people finally see that there is a problem and even recognize the person as a victim of abuse…

Prayer:  Lord, rescue Your children from the abuses of this world. Bring healing and restoration to all. Set us free Lord and lead us down the path for our lives that You have chosen for us without bondage and pain. Turn hearts to you Lord so all will walk in righteousness and follow the example that You set to treat others with love and respect… in Jesus’ Name. Amen.

2 Responses to HE LIFTS US UP: ABUSE AWARENESS– Physical Abuse