HE LIFTS US UP: ABUSE AWARENESS– Human Trafficking 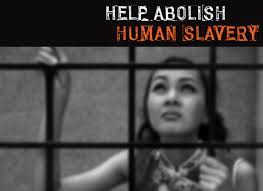 Human trafficking is a form of modern-day slavery where people profit from the control and exploitation of others. Victims of human trafficking include children involved in the sex trade and adults age 18 or over who are coerced or deceived into commercial sex acts. Then, there is labor trafficking where some are forced into different forms of “labor or services,” such as domestic workers held in a home, or farm-workers forced to labor against their will.  Even human organs are trafficked. The factors that each of these situations have in common are elements of force, fraud, or coercion that are used to control people.  Then, that control is tied to inducing someone into commercial sex acts, or labor or services.  Numerous people in the field have summed up the concept of human trafficking as “compelled service.”  Every year, human traffickers generate billions of dollars in profits by victimizing millions of people around the world.  Human trafficking is considered to be one of the fastest growing criminal industries in the world.

Sex trafficking is one of these forms of human trafficking and occurs when people are forced or coerced into the commercial sex trade against their will, including children.  Sex traffickers frequently target vulnerable people with histories of abuse and then use violence, threats, lies, false promises, debt bondage, or other forms of control and manipulation to keep victims involved in the sex industry.  Sex trafficking exists within the broader commercial sex trade, often at much larger rates than most people realize or understand.

Sex trafficking has been found in a wide variety of venues of the sex industry. Some use brothels, online escort services, or strip clubs. Others use fake businesses as a front, street prostitution, or hostess clubs. These victims are held against their will in dangerous situations.

Lord, You know the vast numbers of victims who are trapped in human trafficking around the world. You see it all. They are not hidden from You, Lord. Expose where they are. Expose these human trafficking groups and set all the captives free. We come together in prayer for all victims, that You will rescue them from their captors and bring healing and restoration to the multitudes… in Jesus’ Name. Amen.

8 Responses to HE LIFTS US UP: ABUSE AWARENESS– Human Trafficking