Where Were The Sheep? 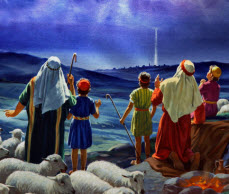 flocks by night. Then the angel showed up and broke the news that their Savior had been born. So the shepherds hurried off and found Mary and Joseph and Baby Jesus.

“Let’s go straight to Bethlehem, then,” they said, “and see this thing that has happened, which the Lord has made known to us.” Luke 2:15.

But where were the sheep? The shepherds couldn’t haul their flocks with them all the way to Bethlehem. Their flocks were their livelihood, their only provision for food, clothing and shelter for their families. They were “keeping watch” over them when the angel appeared. They abandoned their flocks to obey the Lord’s calling. Exposing their flocks to hungry animals and other dangers of the night.

When they returned from seeing the Christ child and Joseph and Mary, the Bible says they came home and “made known” all they had seen.

Where were the sheep? The Bible makes no mention of them on the shepherds’ return. I like to think their flocks were intact, just as they had left them. Safe. Protected from harm by the same God who visited the shepherds in the countryside.

Isn’t that just like God? Calling us to serve Him and taking care of every little detail for us.

God blessed me with the gift of writing. Mom told me I wrote paragraphs in second grade when others were learning to write sentences. I spent more than three decades in professional writing gigs. For the past eight years I've combined my passion for writing with my love for the Lord. He and I write a Christ-centered, family-friendly blog to glorify God Monday-thru Friday at https://stevensawyer.wordpress.com/. My wife and I have four grown children and two precious granddaughters we co-parent with their mom. I'm a Galatians 2:20 disciple of Christ seeking to allow Christ to live His life in me, through me, and as me.
View all posts by Steven Sawyer →
This entry was posted in A CLICK A BLESSING TODAY, BIBLE LANDS, CHRISTIAN LIFE AND THE WORD, CHRISTIAN NUGGETS, WONDERFUL WORDS OF LIFE and tagged Angel of the Lord, Bethlehem, flocks, joseph and mary, sheep, shepherds. Bookmark the permalink.

3 Responses to Where Were The Sheep?