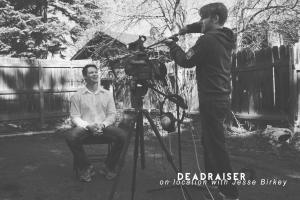 The gray sky showed no sign of giving up the onslaught of rain.  I shoved my hands in my pockets as I ambled towards the store.  It’d been days and the clouds still hid the sun like a bully.  Maybe this is how the Great Flood started out…maybe that’s a bit dramatic.

Nevertheless, I was thinking about how the rainy season is not supposed to be in September when I noticed a man squatting against a rough wall.  He was taking slow drags on a cigarette that was half spent and clearly lost inside his own head.

I straightened.  The voice was soft and gentle yet sure and steadfast.  You want me to talk to that guy?

Yes, what do you see?

I looked at the man only a moment before I saw water cascading down his body from a waterfall hovering over his head.

I want you to tell him what you see and then I’ll give you the rest of the message.

Well okay then.  I slightly altered my direction until I was standing in front of him.  “Hey how’s it going?  My name is Jesse.”

He stood quickly to shake my extended hand.  “Hey,” was all he offered.

“Sometimes I feel that the Lord lays things on my heart for others.  Would it be okay if I shared what I feel He has for you?”

His eyes darted to the left and right a few times.  Maybe looking for someone to save him from the crazy guy.  “Uh, yeah…sure.”

As I told him about the waterfall his eyes grew wide.  As I relayed the message God gave me about how the waterfall is His goodness flowing on him, the skeptical look was replaced by wonder and reflected that something deep inside of him was being touched, washed even.  I told him that the water wouldn’t stop flowing over him because God’s goodness, the source, is infinite.

I told him everything that God gave me.  Then I gave his shoulder a squeeze and said, “God loves you, so much more than you know.”

I was reading through Romans 4 the other day when I read this:

“But to a laborer, his wages are not counted as a favor or a gift, but as an obligation (something owed to him).”  –Romans 4:4 AMP

Paul’s words here reminded me of the story above.  Not so much the content of the story but of the attitude ormotivation behind it.  Why do we get ourselves involved in things like talking and praying with strangers?  Why do we minister at all?

The answers to that question vary but I’d like to point out something that should have no bearing on our answer whatsoever:  Obligation.

I think that many times we feel obligated to do for God.  He died for us so we must meet certain criteria.  He fulfilled his end of the agreement so we must fulfill ours.  We tend to view our relationship with God in contract terms, like the laborer and wages Paul spoke of above.

But Jesus never presented his followers with a contract to sign.  Instead he took every opportunity to invite them to share in his life.  He invited them into covenant and he invites us into the same.

God is not our employer.  The option for a contract relationship never has existed with God.  It was, and will never be, on the table.  We have been given one option and that is covenant.  He has completely invested in our lives and asks us to do the same.

So when we reach out to others or minister in whatever way we feel led, we are not doing it for him out of obligation to an employer.  We are doing it with Him as a co-laborer (1 Cor. 3:9).  We are doing it because we are compelled by the love we have for him and the deep desire to share in his life as he shares in ours.

So, as Paul says, let us exult and rejoice in our hope of experiencing and enjoying the glory of God (Rom. 5:2).  That isn’t possible when we feel obligated but it’s impossible NOT to live Paul’s words when we are compelled by love that comes with sharing in the life of Jesus.

Firefighter/Paramedic, Author and minister of the gospel.
View all posts by jessebirkey →
This entry was posted in A CLICK A BLESSING TODAY. Bookmark the permalink.

2 Responses to God and Obligation