I was there. At the empty tomb. Really!

I don’t think so.

Easter began as a pagan ritual of Spring. Easter apparently gets its name from the pagan goddess “Ishtar”, a goddess of love, (or in her day, lust). The Israelites joined in the pagan rituals of their godless neighbors. Israel’s King Ahab married the Babylonian princess Jezebel. Under Jezebel’s pagan influence, Ahab . . .

“did not do what was right in the eyes of the Lord. He walked in the ways of the kings of Israel and also made cast idols for worshiping the Baals. He burned sacrifices in the Valley of Ben Hinnom and sacrificed his sons in the fire, (child sacrifices on altars worshiping pagan gods)  following the detestable ways of the nations the Lord had driven out before the Israelites. He offered sacrifices and burned incense at the high places, on the hilltops and under every spreading tree.”
2 Chronicles 28:1-3.

It was a season for pagan rituals, prostitution and sacrificing babies to the gods to plead for good crops.

“In the Spring, as the weather was getting warmer and the days were getting longer, people would see nature renewing itself–the plants would begin to flower, trees would put out new leaves, animals would begin to have their babies. In a world so entirely dependent upon agriculture for its survival, where children were essential as cheap labor, it is perhaps no great surprise that people did whatever they thought necessary to make sure the fecundity of their domestic livestock, the fertility of the soil in which their crops would germinate, and their own ability to reproduce. In the Spring, the people would celebrate the fertility they saw all around them in great festivals. Since the trees were putting on new clothes, so would they. They would celebrate symbols of fertility–the egg, the extremely procreative rabbit. It is from these traditions that many of our own Easter rites derive–the decoration and discovery of Easter eggs, the legend of the Easter bunny, the adornment of ourselves with new and colorful outfits.”²

So, you won’t hear me wish you a Happy Easter. But I will wish you a blessed Resurrection Day.

¹Neverthirsty.org.
²The Last Week Of The Life of Christ and The Feasts of the Jews by Bill Risk on Lambert Dolphin’s website. 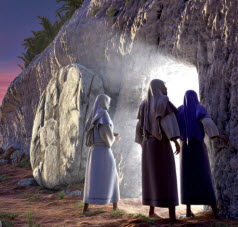 God blessed me with the gift of writing. Mom told me I wrote paragraphs in second grade when others were learning to write sentences. I spent more than three decades in professional writing gigs. For the past eight years I've combined my passion for writing with my love for the Lord. He and I write a Christ-centered, family-friendly blog to glorify God Monday-thru Friday at https://stevensawyer.wordpress.com/. My wife and I have four grown children and two precious granddaughters we co-parent with their mom. I'm a Galatians 2:20 disciple of Christ seeking to allow Christ to live His life in me, through me, and as me.
View all posts by Steve Sawyer →
This entry was posted in A CLICK A BLESSING TODAY, ALL GOD'S PEOPLE, CHRISTIAN LIFE AND THE WORD, GOD'S PROMISE - JESUS CHRIST, WONDERFUL WORDS OF LIFE and tagged Atlanta, Easter, Easter bunny, Easter eggs, Georgia, Passion Play, Resurrection, the Lamb of God. Bookmark the permalink.

4 Responses to I was there. At the empty tomb. Really!