I went to a strip club

Posted on May 17, 2016 by setyourpathsstraight 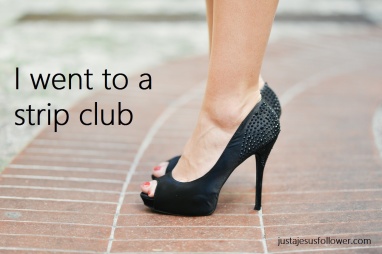 We love because he first loved us. If anyone says, “I love God,” and hates his brother, he is a liar; for he who does not love his brother whom he has seen cannot love God whom he has not seen. And this commandment we have from him: whoever loves God must also love his brother. 1 John 4:19-21 ESV

A wise 19-year old young lady sent this out on her Facebook. It is awesome. It is real. It is about a bunch of sick sinners….about us all. Jesus said people would know we belong to Him if we love others…not through our own flesh, but via the power and the perfection of His Spirit in us. So, how ya doing so far? Me? I fail everyday. Thanks Anna McCarthy, author of Just A Jesus Follower…This message is whispering into my soul this very day.

A while back I was asked by a group of pastor’s wives to go with them to strip clubs.

That sentence alone sounds strange. But hang with me.

At first I was a little hesitant. And not for reasons you might think.

I love people. Especially ones who are broken; it’s part of my calling. But, given what I’ve walked through, I know how fragile broken people can be.

And I know how insensitive the church can be.

And I was uneasy.

But, these weren’t just any pastors wives.

They had a vision.

One that longed to love on women that society had thrown aside.

It reminded me a lot of Jesus.

Their plan was to visit these clubs once a month to deliver a meal and gift baskets. I joined them the first night and I’ll be honest, I had NO IDEA what to expect.

Now, I had my fair share of time (back in the day) in bars and such, but I’d never been to a strip club. I was totally unaware of what I was walking into.

We arrived and the bouncer ushered us back into the dressing room where we introduced ourselves and began distributing the gifts and food.

I was shocked by what I saw.

And I’ll tell you why:

I was raised to believe that no good comes from places like that. Which is probably true on many levels. (I wouldn’t suggest making it your go-to for date nights)

But, I was filled (as were many Christian kids) with fear about “places like that”. That “those people” were heathens and doing all kinds of sinful, shameful things.

Which, again, is true of strip clubs.

And many other places.

But, these girls – these lovely, girls – were so…..normal.

As I talked with one in particular, she reminded me of any young mom I’d talk to in the school pick up line.

Minus the fact that she didn’t have much clothing on – I tried not to focus on that.

(Oh dear God, she’s talking about strippers in a Christian blog and talking about them being half naked. We should not EVEN be thinking such things! First, my sweet friend, it’s okay to laugh. Like seriously, it’s OKAY. The fact that 4 pastors wives and their pregnant friend even went into a strip club is kinda funny. If you’re going to walk with Jesus, you’re going to find yourself in some pretty awkward situations. And if you don’t have a sense of humor, you’re toast. Like seriously. So, I give you full permission to go ahead and laugh at the mental picture):)

They showed pictures of their children, talked of pregnancy (I was pregnant at the time) chatted about trying to get back in shape after having a baby, etc. It was SO NORMAL.

But, as we talked, and I looked into their eyes, I saw women – young, broken women. Who had stories, probably much like mine or yours.

We didn’t stay long. They had a shift to work, and we didn’t want to overstay our welcome.

But, as we left, they thanked us.

As I drove home, I totally fell apart in my car.

I cried because my heart was broken .

One thing the Lord continues to do in my heart, is humble it. Like over and over. Countless times, I think I’m going in to minister to some lowly soul and then I walk out, completely undone because the condition of my own heart was exposed.

I wept before God asking for His forgiveness in the way I had viewed women in that profession.

Because, people – that could have been me.

It could have been any of us.

Had my journey taken a few different turns, I very well could have been on the receiving end of that encounter.

Man. HE WRECKED ME.

I had my baby shortly after that visit and didn’t get to go back for the monthly visits to see the women.

But, I stayed in contact with one of the women organizing it and every so often, I ask her how it’s going.

They have been visiting them for a year now and received permission to leave a prayer box where the women could leave prayer requests.

The first few times they collected the box it had silly things written in it.

But they continued to leave it there.

Over the following weeks and months (as they continued to love on these women), the prayer requests got real.

Last time my friend and I got together, I asked about the strip clubs and this is what she said:

Her eyes always, always fill with tears when we talk about it because God is SO in love with these precious women.

She said, “The women are starting to reach out more. I’ve been texting with one and getting to connect with her a bit deeper”

We talked a bit more and she turned to me and said something that I am still rattled by.

“You know what one of them said to me last time?”

She said, “Apparently other churches send them hate mail. ALL THE TIME”

I’m sure my face turned three shades of white.

Complete shock and disbelief gripped me.

We both looked at eachother and about fell into a pool of tears right there.

People – church – WHAT ARE WE DOING?!

Did we forget (or do we just sing it songs) that Jesus was a friend of sinners?

Did we forget that it’s his kindness that leads us to repentance?

Did we forget that it is ONLY the blood of Jesus that makes us holy?

That ALL OF OUR GOOD BIBLE LOVING STUFF is like filthy rags without Him?

Jesus was UNAFRAID of walking in love to the least of the least.

He walked right in, sat down and ate with sinners.

And the religious HATED HIM FOR IT.

A few years ago, I met with another pastor’s wife across the country who shared with me a similar ministry, although after months of developing relationships with the dancers, they asked the owners a crazy question.

They asked to hold a Bible study.

IN THE STRIP CLUB.

Just for the dancers.

Surprisingly, they were given a yes.

(Something about it building morale in the employees, but whatever. It was a yes!)

So, they started leading a Bible study in the club.

But, something was missing.

And those ministering knew it.

The women they were ministering to needed to be led by a man – not because these women were incapable, but because of the damaged, skewed image they had of men. They needed to see a man who was safe – they needed a man who knew Jesus.

This woman’s husband (who was a pastor) stepped up and took on the challenge. And, for months the dancers wouldn’t even look him in the eye.

But he kept showing up….

Soon, one by one, the women met Jesus through this pastor’s humble, gentle leadership.

There were prayer sessions.

And many went on to lead, healthy restored lives.

All because this group of women and this pastor were unafraid to go where God was leading them.

I’m not suggesting that we all have this calling.

I am not the Holy Spirit.

What I AM saying to you is that if Jesus were here, walking among us, wouldn’t it be just like him to walk into the most un-Christlike place (strip club or whatever) and completely freak the religious folk out?

But, he can only reach as far as you and I are willing to go.

It is my desire to serve God and others through writing; by proclaiming His goodness, provision and character in story form. Though I was not always a follower of Jesus Christ, I have experienced life changes that can only be a result of personally meeting Him. He is not a God of religion, but of relationship. I don't have the answers to life's challenges, but I know where to find them...only in God's Word can any of us stop following crooked paths. The month of my spiritual birthday, I read Proverbs 3:5-6 and claimed it as my life verse... "Trust in the Lord in all you do, lean not on your own understanding In all your ways acknowledge Him.... and He will Set Your Paths Straight." Thank you for your visit today. Please come back again.
View all posts by setyourpathsstraight →
This entry was posted in A CLICK A BLESSING TODAY, CHRISTIAN LIFE AND THE WORD, SETTLED IN HEAVEN, SHARING STRUGGLES , Shaping Spiritual Solutions! and tagged Christ-like, churches, loving others, Religiosity. Bookmark the permalink.

3 Responses to I went to a strip club