On a September Morning

Posted on September 14, 2018 by HCliffCraig.com

Seventeen years ago on a beautiful September morning

Our lives were changed forever.

On another September morning I attended the funeral of a young man who at one time was my son-in-law. His marriage to my daughter ended several years ago, caused in part by the same demons that eventually took his life. Tuesday morning after returning home I remembered as I have for the past seventeen years the horrible events on that sunny fall morning. Writing for the past three years has brought comfort in difficult times but on that morning 17 years later I just couldn’t find the words to write.

This evening as I was thought about difficult times then and now I remembered a prayer written by Max Lucado a few days after 9/11.

We turn to God in times where comfort cannot be found, when no explanation lessens the pain. I found comfort in Mr. Lucados words all those years ago and they still speak to me today. Because his words speak of a God who may not answer all the questions but brings comfort and peace even when we do not understand. Whatever storm you might be going through I hope it does the same for you.

A prayer written by Max Lucado for America Prays, a national prayer vigil held Saturday, September 15, 2001. It seems fitting as we remember the anniversary of 9/11 to share it once again. Permission to copy is granted and encouraged.

But we won’t, will we, Father? What we saw was not a dream. Planes did gouge towers. Flames did consume our fortress. People did perish. It was no dream and, dear Father, we are sad. 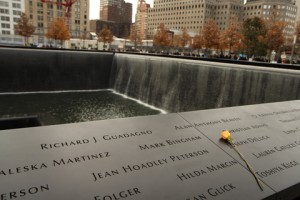 There is a ballet dancer who will no longer dance and a doctor who will no longer heal. A church has lost her priest, a classroom is minus a teacher. Cora ran a food pantry. Paige was a counselor and Dana, dearest Father, Dana was only three years old. (Who held her in those final moments?)

We are sad, Father. For as the innocent are buried, our innocence is buried as well. We thought we were safe. Perhaps we should have known better. But we didn’t.

And so we come to you. We don’t ask you for help; we beg you for it. We don’t request it; we implore it. We know what you can do. We’ve read the accounts. We’ve pondered the stories and now we plead, Do it again, Lord. Do it again.

Remember Joseph? You rescued him from the pit. You can do the same for us. Do it again, Lord.

Remember the Hebrews in Egypt? You protected their children from the angel of death. We have children, too, Lord. Do it again.

And Sarah? Remember her prayers? You heard them. Joshua? Remember his fears? You inspired him. The women at the tomb? You resurrected their hope. The doubts of Thomas? You took them away. Do it again, Lord. Do it again.

You changed Daniel from a captive into a king’s counselor. You took Peter the fisherman and made him Peter an apostle. Because of you, David went from leading sheep to leading armies. Do it again, Lord, for we need counselors today, Lord. We need apostles. We need leaders. Do it again, dear Lord.

Most of all, do again what you did at Calvary. What we saw here on that Tuesday, you saw there on that Friday. Innocence slaughtered. Goodness murdered. Mothers weeping. Evil dancing. Just as the ash fell on our children, the darkness fell on your Son. Just as our towers were shattered, the very Tower of Eternity was pierced.

And by dusk, heaven’s sweetest song was silent, buried behind a rock.

But you did not waver, 0 Lord. You did not waver. After three days in a dark hole, you rolled the rock and rumbled the earth and turned the darkest Friday into the brightest Sunday. Do it again, Lord. Grant us a September Easter.

And we thank you for these hours of prayer. The Enemy sought to bring us to our knees and suc­ceeded. He had no idea, however, that we would kneel before you. And he has no idea what you can do.

Let your mercy be upon our President, Vice President, and their families. Grant to those who lead us wisdom beyond their years and experience. Have mercy upon the souls who have departed and the wounded who remain. Give us grace that we might forgive and faith that we might believe.

And look kindly upon your church. For two thousand years you’ve used her to heal a hurting world.

Do IT again, Lord. Do it again.

As written by Max Lucado for America Prays, a national prayer vigil held Saturday, September 15, 2001. Permission to copy is granted and encouraged.

“Now at last they were beginning chapter One of the great story no one on earth has read: which goes on forever”. I love this line at the end of the Last Battle by C.S. Lewis. Everyone has a story to tell and ultimately we are all part of a greater story that someday will be revealed in full. “ For now, we can only see a dim and blurry picture of things”. ( 1 Corinthians 13:12). My story is not remarkable, although the events I have had the privilege in my life to witness have been. I grew up in the south “the land of cotton” and the old times there were definitely not forgotten. I remember where I was and what I was doing when JFK and Martin Luther King were murdered in Dallas and in Memphis. I remember the Civil Rights movement, a time of great unrest and change. I remember the dawning of the “Age of Aquarius” in the late 1960’s. It was also the dawning of my love for playing music, a love that has stayed with me throughout my life. If my life were chapters in a book one would tell of my precious bride of 20+ years who endured so much and stood beside me through the good and the bad. One would describe the blessings of being a father and a grandfather. One would tell about how despite being “the wretch” the song sings about God was able to change me, and use me to make a difference in others lives, make me a servant in His church, and surround me with friends all because of His goodness. All part of a story that has had many twists and turns. I think of the words Jimmy Buffet wrote in one of my favorite songs "As a dreamer of dreams and a travelin’ man I have chalked up many a mile Read dozens of books about heroes and crooks And I learned much from both of their styles" And so it is true for me. But in all of my travels and all I have read and experienced nothing compares to where I am headed. The place where my story here ends and the story that goes on forever begins! "" I am confident that He who began a good work in you will carry it on until completion until the day He returns". Philippians 1:6 My hope is that as we all run our race that in some small way my words will encourage and speak to you, as your story is being written. And draw you ever closer to the One who loves you. Further up and further in!
View all posts by HCliffCraig.com →
This entry was posted in A CLICK A BLESSING TODAY, CHRISTIAN TEENS BLOGS, SHARING STRUGGLES , Shaping Spiritual Solutions! and tagged 9/11/2001. Bookmark the permalink.