Therefore I have hope: Lamentations 3

O Lord you are so good, therefore i have hope.

Bible in a Year Blog 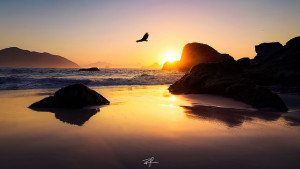 “Hope is faith holding out its hand in the dark.” George Iles

Parade magazine told the story of self-made millionaire Eugene Land, who was asked to speak to a class of 59 sixth-graders. He wondered how he could change the lives of these predominantly black and Puerto Rican children, most of whom would drop out of school. Throwing away his prepared speech, he told them, “Stay in school and I’ll help pay the college tuition for every one of you.” Suddenly the students had hope. As one student said, “I had something to look forward to, something waiting for me. It was a golden feeling.”

Jeremiah maintained his hope in spite of the terrible ordeal of Jerusalem’s siege and fall. He witnessed famine, cannibalism, cruelty, and personal attacks against himself. Yet he still clung to his faith in God and the belief that good would return.

Jesus Christ is coming soon
View all posts by ptl2010 →
This entry was posted in A CLICK A BLESSING TODAY. Bookmark the permalink.