Posted on June 17, 2020 by setyourpathsstraight 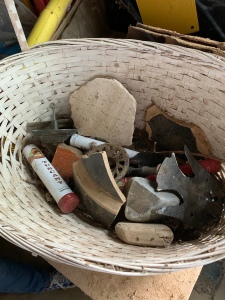 “Awesome over awful…” This is the sentence that I “heard” in my head at 3:33 AM – I didn’t know why. So as I pondered it quietly and prayed, I finally fell back to sleep.

When I awoke later in the morning it was still in my mind.

Yesterday was a day that I had to go to my parent’s former home which is being sold now. My father passed away last August and my mother lives elsewhere. (An 85 year-old woman cannot live there alone).

Going to their house fills me with so many emotions. Both good and bad. Happy and heart wrenchingly sad. It’s an historic home, visually beautiful – surrounded by peaceful pastures and trickling streams. It boasts one of the largest and oldest trees in the county, dare say the state- purportedly used as a recruiting area for General Lafayette in the Revolutionary War. Built in 1730, it has a complicated and tumultuous history long before my parents lived and loved it for more than 30 years.

The past couple of years or so have also been filled with tumult, pain and drama in my family – going there sometimes scrapes at old personal wounds.

But God. He knew this.

So He spoke into my heart and whispered quietly into my spirit in advance. “Look for the awesome over the awful.”

I shared this on the drive out there with my sister. Upon arriving, the first thing we heard were the chimes hanging in the tree by our dad’s grave. This happens almost every time we arrive there. The chimes hang quietly and then when we approach the grave yard they start clanging. It was if my dad was greeting us. Hearts skipping a beat, we called out “Hullo Dad” and went to his grave to tend it.

And so we settled into the dirt and dug and wept and talked to him and told him about his land and this time apologized to him that his house was being sold. He never wanted that. But there is no choice. It needs a new caretaker and it deserves to be loved again, not just kept.

Pulling weeds, planting flowers, adjusting sweet “left behinds”, we finished our ministrations and then poured a little peach brandy over it all (we do this every time – it was his favorite).

Later, my sister and I took our bag lunches and sat in his kitchen and ate, remembering family visits, talked about the house, the land and shared our own feelings. We walked through each room in that house and called his name. We released our heavy hearts and prayed over every inch of it. We wanted to release any negatives lingering. We asked God to bless the house. The future family in it. And its new history.

Afterward, we went to our dad’s workshop and re-experienced his personal passion. There were baskets and boxes and stray items everywhere. As the property is very old, our father had a penchant for digging up treasures from his beloved acreage. Old milk glass, broken blue and white pottery, stray iron nails, pieces of pot belly stoves. Brick a brack, rail road ties. Iron pegs of unknown origin. And the stray cigar tube (pretty sure those were his). His “tiffles” as he would call them. There was writings on the walls where he stored his tools and reminder notes to remind his reminding. (He suffered from Alzheimer’s in the end and wanted so much to remember to remember).

It was heart breaking. It was happy. And the workshop smelled like our dad. Loamy tools from digging in his gardens, faint smells of cigar stubs. Boxes and boxes of unused nails of all shapes and sizes. Stacked up original bricks from the house foundation that were so old they had pocks in them. They smelled like musty Virginia clay.

It was awful. It was awesome. And it filled our hearts. We felt him there. And once again I was physically close to my dad. I needed that so much. As I looked up with wet eyes, I saw my sister standing there with light from the window on her face and saw him in her. I smiled. And in a wee way, this “awful” day helped to sort through our own broken pieces and heal over many scabs in our souls.

In those moments with my dad and my sister, I learned the meaning of His 3:00 am whisper to me. We had collectively found awesome over awful. It was one last gift from our earthly Daddy. And yet another blessing from our Heavenly Father. And I smiled. And so did God.

It is my desire to serve God and others through writing; by proclaiming His goodness, provision and character in story form. Though I was not always a follower of Jesus Christ, I have experienced life changes that can only be a result of personally meeting Him. He is not a God of religion, but of relationship. I don't have the answers to life's challenges, but I know where to find them...only in God's Word can any of us stop following crooked paths. The month of my spiritual birthday, I read Proverbs 3:5-6 and claimed it as my life verse... "Trust in the Lord in all you do, lean not on your own understanding In all your ways acknowledge Him.... and He will Set Your Paths Straight." Thank you for your visit today. Please come back again.
View all posts by setyourpathsstraight →
This entry was posted in A CLICK A BLESSING TODAY, CHRISTIAN LIFE AND THE WORD, SHARING STRUGGLES , Shaping Spiritual Solutions!, WONDERFUL WORDS OF LIFE and tagged death, God, grief, Life lessons, loss, pain. Bookmark the permalink.

1 Response to Awesome over Awful